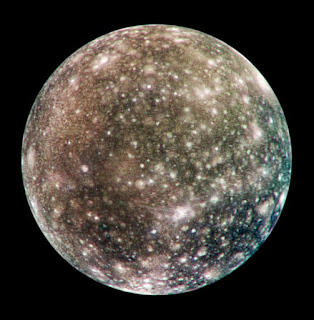 Callisto is a 50 y.o. terran colony built barely outside of the 100D line from Jupiter. Its mainstay economy is fast refueling of traffic going through Terra but not heading to the mainworld. An auxiliary economy based on the harvest of rare metal at the bottom of its subsurface ocean.

Shatah-1: Main colony (35K). Located 85Km under the surface. Home of civil administration. Homogeneously muslim. Local diet made of imported goods and locally grown autotrophic biomass from the depth of the subsurface ocean.

Shatah was founded by Saudi interest and populated with middle-eastern colonists. The moon is covered by 100km of ice (Water, carbon dioxide, volatile compounds). The moon is under regular bombardment by meteorites. As a result, the installations are all carved under at least 100m of the moon's crust. The bulk of the colony is, however, located near the ceiling of the subsurface ocean.

The main economic activity is the fast-refueling service allowing transient traffic to be intercepted out of the 100D line of Jupiter. The interceptors are refueling drones propelled from Callisto using gaussian accelerators.

Posted by bongotastic at 4:00 PM

Aeryn should have Research-12 (I built this in the chargen). She rolled 13 vs Research-12 (as a research using online information). It appears that the state of discovery in Callisto is not sufficiently in the public domain for her to assess. Finding out more will require some kind of alternative strategy (going through people, etc), online searching returns nada.

I make an alarm on my tablet to remind me to try and get out and shake a few hands and see if anyone on the refueling outpost trains any kind of martial art at all.

I hope if I can find a gym and leverage my fighting career, the gym owner will know someone who trains there that either works at or knows somebody who works at a place that would at least have some raw data on compounds found there.

Aeryn figures it's no time like the present to start getting to know people. If we refuel there often it might pay off.

Aeryn 10 vs Area Knowledge(Callisto)-8 (-4 because of size and remoteness)
No real good knowledge so such a small place.

9 vs Current-Affair(MMA)-11
You know of one Gym with a good reputation in Shatah-1. Furthermore, you have met one of the trainer there at a tournament. His name is Hassan Al-Shab.