The CAMEROON has picked up 22 medical refugees from a beleagued Vilani space station near Prometheus IV. They are to set out to the edge of the UWO territory, at the gates of the Vilani Empire.

Prometheus IV is a distant gas giant, some 47 AU from the main world. The area is considered "high density planetary belt", with a unusually high radiation belt, and unpatrolled. The TOLSTOI is a station designed to harvest and refine rare gas and ship them out of the gravity well using a powerful electromagnetic accelerator. It is incomplete and damaged by violent brushes with the upper atmosphere. 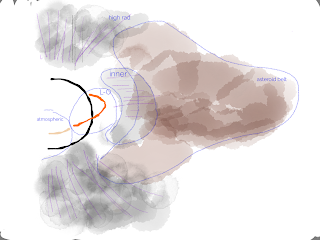 The CAMEROON exit jumpspace at the edge of the orbital space for Prometheus' main world. During the jump, Diane rigged the bank account to transfer 100KCr of her own funds and make it looks like a payment from the refugees. The crew has been socializing with the Vilanis during the jump, and a business association between the crew and a Vilani Knight, Edros Khamarian III has formed.

Upon entering the orbital space, the CAMEROON decides to bypass the declaration of all thes vilanis and instead focus on the acquisition of Terran electronic hardware. They pay their due to the Douala cooperative (920KCr), purchase 500KCr worth of Terran electronics and pick up a small freight job.

Meanwhile, Anika makes contact with the Mayor of Brethrow. Using the name of the Yakusa that they met in the past, she gains the crook's confidence and manages to negotiate the purchase of 4 grown raptors. Edros bankrolls the operation, with a plan to make it worth the investment once outside of UWO territory.

The CAMEROON finally arrives to Nusku after hopping through Barnard and Aggida. Edros contacts his uncle, Lord Khamarian of Lloso, and propose to organize an exotic hunt with the Promethean raptors. They identify the jungle world of Zaggizi as a good candidate to congregate vilani nobles with deep pockets. This would take them into the Empire, where their contraband electornics would be fetching a higher price as well.

Lord Khamarian reluctantly acknowledge the idea and tell Edros that he'll look into rounding nobles for the event to be held in the near future.

Posted by bongotastic at 4:42 PM